​Almost one of the wonders of the world?

​This is a luxury hotel in Dubai. The building itself stands at sea 270 meters from the shore on an artificial island connected to the ground by a bridge. It has a height of 321 meters and was the tallest hotel in the world until a taller one appeared in Dubai, also called the Rose Tower, 333 meters high. As of 2017, Buj Al Arab is the 56th tallest building in Asia and the 70th highest in the world.
​​

The hotel itself opened for visitors on December 1, 1999. The hotel has the look of a sail dhow, an Arab ship. At the top there is a helipad, and on the other side El Muntaha restaurant. The lobby itself consists of two floors: the first one is registered at the hotel, and on the second there are all the boutiques and trendy shops, as well as the corridor that leads to the high-speed elevators. In this hotel the highest atrium lobby in the world is 180 meters. Also in Buj Al Arab you will not find ordinary rooms; It is divided into 202 two-storey rooms. The smallest room occupies 160, and the largest is 720 square meters. Also it is one of the most expensive hotels in the world: the price per night is from 1000 to 15000 $.The most interesting thing is that the hotel characterizes itself as a seven-star hotel, which is an attempt to get out of the category of hotels that characterize themselves as six-star hotels. 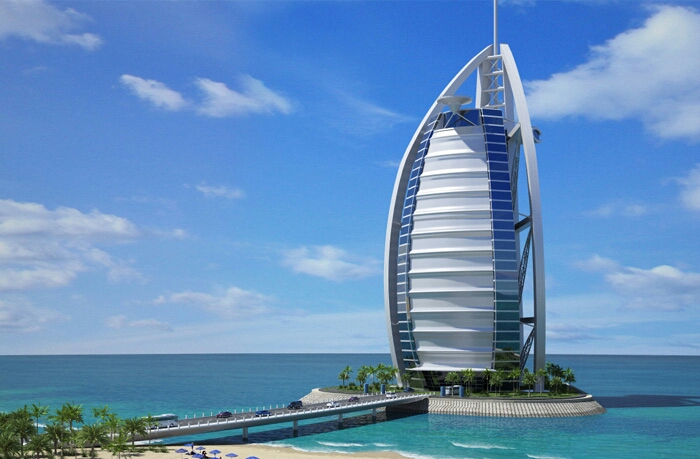 ​The interior uses about 8000 square meters of 22-carat gold leaf, and the design offers the highest level of comfort and convenience. Also all rooms are equipped with the latest technology.
I believe, if they made up a new list of wonders of the world, I would definitely put this hotel here. He is really very beautiful outside and luxurious inside. It is a pity that only a few people can live in it, but it’s worth it. Beauty is unreal.